Major General A.I. Baksov's 67th Guards Rifle Division (GRD) of 22nd Guards Rifle Corps was defending astride the main road that ran from Borisovka northward through Butovo and Cherkasskoe to Oboian. His right flank covered by the 71st GRD. 10km to the rear the 90th GRD backed up by the 6th Tank Corps of the 1st Tank Army formed a second echelon defenses along the Pena river. The 67th defended a 14km sector along a low generally treeless ridge line. The main routes into Baskov's positions ran northward along either side of the village of Butovo.

Baksov created a security belt that ranged from two to four kilometers in front of his main defenses anchored  on Butovo.

Preliminary fighting started shortly after 1600 hours on on 4 July 1943 in the south, as Fourth Panzer Army had elected to try to take the Soviet outposts prior to the main assault on July 5. 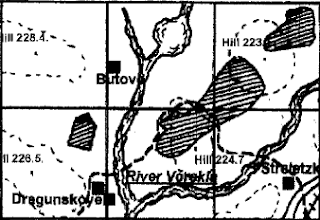 Map used with permission from the Spearhead Yahoo group. 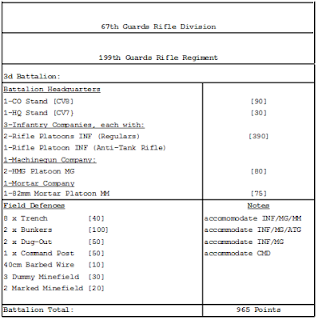 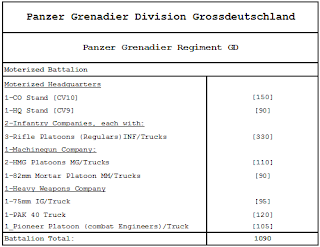 Soviets deploy first up to one third of the table.
Germans nominate a player as their Recon element. Gets 1D3x30 seconds in the room with a map of the table. May mark, measure and take notes of the Soviet deployment. May not ask any questions.

Germans can then formulate their plan, divide up their units into formations and should use the map to mark where each formation will enter the board from (note xcm from left hand corner). Germans deploy opposite and use mobile deployment.