Finally after over a year of waiting (we first saw preview copies on You Tube for Gen Con 2011) I have X Wing!

Now I had previously ordered a copy of the base game from Maelstrom but when I heard it was finally out in the UK on Tuesday I got so excited I had to call Inner Sanctum Collectables (ISC) our local game store to see if they had stock.

The lady was unpacking the box as I spoke and yes she would hold me back one of each of the expansions (X-Wing, TIE Fighter, TIE Advance and Y Wing). "Did I want a copy of the base game as well?" she enquired, to which I said no I have one on order thanks.....

Of course I left ISC with a copy of the base game as well, hell you know how long it can take Maelstrom to deliver and besides we were off to Sons of War on Wednesday, what better place for a trial run.

I won't do a detailed review here, just some quick observations. The sculpts are great and the paint job is adequate/nice enough. It's refreshing to just open the box, punch out all the counters and play without having to glue the models together and undercoat and (eventually, 3 months later) paint em. I think it's good value for money but then I still buy GW crack so YMMV, you certainly get plenty of counters and of course cards (it's FFG course there's cards of all sizes) only addition I'd make is an extra red damage and green agility dice would have been nice (you get three of each but we found quite often you need to roll 4). Course the second base game will sort that out.

So is it any good? 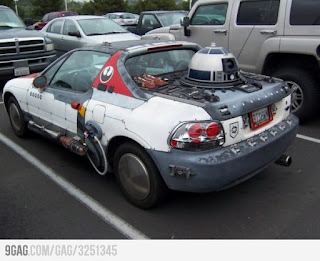 Well if you like Star Wars (hell what self respecting geek doesn't?) then I'd be surprised if you didn't  love this. We were doing Star Wars impressions and humming the theme tune after 5 minutes. The models and cards and nice touches like the double sided Red/Green laser blast range finder all made it feel suitably Star Wars.

It plays like Wings of War (but on speed) the fact you only plot 1 move blind at a time means less analysis paralysis and you never feel like you're all randomly swinging around the table hoping someone will fly across your guns. The rules are simple, short and slick. Pretty much everything is tracked on the table or on your ships card. About 3 turns into our first game we'd stopped looking at the rules it's that simple.

Our first game was me Luke Skywalker Vs an Obsidian Sqd. TIE Pilot and named TIE Pilot "Night Beast" (Grrr..) played by Tom. Tom managed to whip me pretty quickly and I was wondering if the 2 on 1 approach the game has was unbalanced, but then we swapped sides and Tom managed to beat me and Mick wit the X wing so I think I just had my targeting computer turned off!

in the end we played 3 games and I reckon they were all about 30 minutes but felt even faster, turns in this game are quick and there was minimal downtime.

When we meet on the 6th of Oct. plan is to break out X Wing in the evening and I reckon throw in the Squadron building rules. I'll post again then with some pictures and more thoughts on game play.

Until then, may the force be with you.... (or at least take a focus action)

Email ThisBlogThis!Share to TwitterShare to FacebookShare to Pinterest
Labels: Sons of War, X-Wing