The Elephant in the Room

The Elephant being a messy collection of RPGs, Boardgames, Miniatures of all denominations, comics, reference books, tools, bitz etc, the room, the spare at the front of the house. No picture, I'm sure you can just look to that ever increasing collection lurking in your own house. 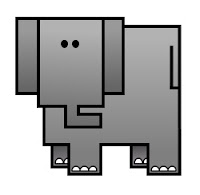 Sell some stuff, cash is good and the elephant can take up some space in someone else's house..plenty to sell and the good thing is that this stuff does keep it's value on ebay. The big question here is do I sell my Imperial Guard, maybe just a part of it and repaint some of the infantry and do an airborne army?

Reorganize what I want to keep, the Chaos Codex is out this week that means getting the Death Guard back out. Nice when a codex comes around and you already have an army (including 30 zombies). Got some fixing of broken models to do and I think I'll be re-painting  at least one squad of plague marines.

Chuck some stuff out or give it away, junk collected for scenery I'm never going to use, WD's, stuff I don't want and can't sell.

Buy new stuff..thats obviously not going to help, but lets face it, it's going to happen might as well get it out the way now.

Email ThisBlogThis!Share to TwitterShare to FacebookShare to Pinterest
Labels: Hobby