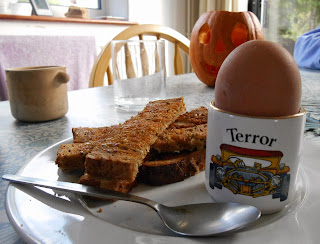 It's become a yearly tradition now to get together with friends and run a one shot game of Call of Cthulhu for Halloween. When I run CoC I'm a pretty brutal keeper, the dice fall where they fall, make a dumb decision you'll probably get eaten, etc, so one shots tend to work really well cause players can cut loose and have fun with their characters without worrying about trying to stay alive for next week. Actually thinking about the attrition rate of the on/off regular campaign maybe they are really all one shots.. Muh Wuh ha ha Ha......


Scuse me, anyway previously on Halloween we have played a Hammer Horror esque wolves and vampires romp, John Wicks excellent SS go mad in Africa scenario, "Digging for a Dead God" and classic CoC adventure "Secrets of Castronegro" (although this actually took 3 sessions and a year to complete)  this year we traveled back in time to 1984 to defile the John Hughes classic film the Breakfast Club..... 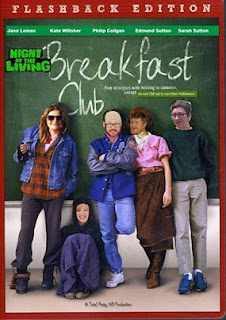 The players get to introduce their character arriving at school and then get an uplifting speech from the teacher Dick Vernon "Right you maggots I got you all day, sit here, don't move write me an essay". who then leaves them in the library.

Of course they immediately start mucking about and annoying each other. Allison and Bender climb up to the mezzanine where they can see a fire burning in the distance and some emergency vehicles go by, whilst Andy and Brian try to sneak out of the library. Andy pulls off a super athletic knee slide past Dicks office but the awkward Brian crashes into a magazine rack. Dick catches them and demands an explanation, they say they are going to the toilet and Dick begrudgingly ends up escorting all 5 of them for a toilet break.


Obviously bored that no fights or monsters have appeared yet, Andy decides to try to trip Bender over on the way into the boys toilet (or maybe bathroom as this is set in America). Bender keeps his footing and comes back with a good slug to Andy's face. Brian decides to come bursting out the cubicle waving his pistol, but then feels a bit awkward and runs out of the bathroom...

Only to slip over on a trail of blood and water and crack his head open on the floor. Alison and Claire arrive back from the girls bathroom just in time to see Brian go ass over tit and have a good laugh before Andy and Bender cool down and rejoin our teen terrors in the corridor who muse over the cause of so much blood and where oh where is their beloved teacher..

They soon deduce the cause of the blood and water in the corridor, Paul the janitor comes hobbling round the corner pushing his bucket with his broom and slopping bloody water around.

As the janitor lunges for them, Andy decides how hilarious it would be to get the janitor in a wrestling hold and then frog march the frothing and biting fiend towards Allison, holding him just far enough away to not chomp off her face.

Allison remembering I had jokingly given her 105% for her Art skill (like that will help) cheekily uses it to stab the janitor through the eye with a pencil ( I had to let her use it really).

Andy finishes off the zombie by slamming the janitors head and protuding pencil against the wall and the janitor collapses to the ground dead (again).

Course by this time Dicks back, back from the dead and dead hungry for flesh. Rather than run, the teens decide to exact some vengeance on their favorite teacher, Bender stabs him in the face and Alison recovering a giant can of hairspray and lighter from her bag attempts to create an impromptu flame thrower....

Can blows up in her hand and also burns off Benders hair.

The players with years of zombie movie experience behind them decide the best course of action now is obviously to turn on each other, and Bender makes an attempt to take the gun from Brian, should be pretty easy he's only small...

thats another critical fumble and the gun goes off shooting the tip of Benders nose off!

Meanwhile Andy has managed to stomp the teachers head in.

Whilst they take stock, from round the corner down the hall comes "parp, urrrghh, chang, parp, urrghh, chang". Finally someone makes a sensible decision to get out of the corridor and our hapless heroes head for their lockers.

A small break is taken by all the players to dance to footloose. 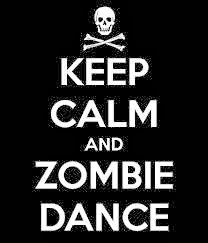 We return to the action at the lockers where the teens of mean are confronted by a zed in football strip and helmet. Meanwhile from up the stairs behind them comes the source of the "parp, urrrghh", a zombie in a tuba, followed by a zombie impaled on a clarinet and a zombie still carrying cymbals in fact an entire marching (shuffling?) band.

Andy in an unlikely flash of intelligence deducing the helmet will protect the zombies brains instead grabs him and throws him down the stairs into the band creating a cacophony of noise and buying the gang enough time to crack open their lockers. Bender retrieves his weed to engage in some self prescribed pain relief, Andy his baseball bat and wrestling mags, Alison applies some actual first aid to her hand and refills her bag of tricks and Claire sets fire to her locker..not entirely sure we ever got to the bottom of what the plan was there.

Bender decides to make another play to get tooled up this time trying to steal Andy's baseball bat....seeing yet another pointless scuffle break out Claire and Alison decide that their chances of survival would be drastically increased by getting shot of the boys and run off down the hall to the wood work lab, stopping only to lament the fact that the caretaker has the keys they get Brian to shoot the lock open and grab chisels and hammers before making an escape out the window onto the flat roof of the science block.

The Zombie marching band crawl stumble and lurch back up the stairs and grab hold of Bender taking a lump out of his thigh. Another critical damage roll later and Bender is zombie chow on the floor. Andy makes a break for it, following the others into the woodwork lab.

Claire (passing a luck roll) finds a fire escape and stealthily slips down the ladder and nips past the Zeds in the car park closely followed by Allison. Andy only stopping to brain Brian, knocks him unconscious and steals his gun before making a run for it across the roof, down the fire escape and dodging through the zeds out across the car park.

With all the booze drunk and the witching hour approaching quickly our glimpse into the terror of the 80's draws to a close our parting shot poor Brian coming around to find himself face to face with his "pal" Bender and a horde of undead who unceremoniously bite him to pieces.... 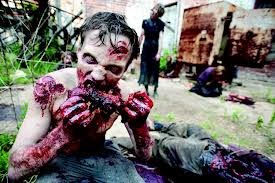 Great fun. If only the players were smart enough to realize how crap the zombies were, if only they could work together for a minute it would have been real easy to escape the school....

Truly we are the monsters...