So I asked our gaming group what project I should be concentrating on this year and the winner was Hitler!

Well er not actually Hitler, I'm not going to make a 1:144 scale game of Hitler but WWII and the Eastern Front, Kursk to be exact. 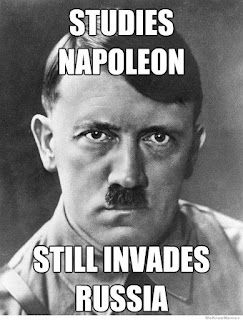 Q: Why start a WWII project?
A: as Ed pointed out it's already half finished!

Cue wavy picture as we travel back about 5 years.

Ed and I got into playing Blitzkrieg Commander (BKC) a rather nice straight forward system based on GWs Warmaster. We even managed  to both get formations finished using the rather nice and very cheap Pendraken 10mmm stuff and even played some games which I remember were rather fun. Then everyone went and had kids and the project got shelved and our minis have sat gathering dust since.

So all we need is to make some terrain and off we go...of course like the terrible Charlie Chaplain impersonator above this time we want more!

A campaign and the fun stuff that will make the battles feel a little more ‘real’ and the outcome of each one important to the next game.
Large Operational map divided into 1' sections, so it can then be translated onto a table. Interesting objectives. Want things like bridges/roads and your flanks to matter
Realistic approaches to casualties causing ends to engagements etc.
Rules for target priority i.e. tanks shoot tanks, before infantry etc.
Battalion level (stand of infantry is a platoon?).
Option for team games, with high commander and subordinate commanders.
Capture the cut and thrust of trying to penetrate enemy defence lines whilst securing your own flanks.
High Command sets strategic objectives, allocates resources etc.
Local commanders on the ground doing the tactical planning and carrying out the attack.
Written requests for reserves, fire support, new orders to/from high command/other boards. Limited deviation from orders allowed. Fog of War
'Historical' formations. Hidden movement/deployment at operational level and tactical level. Lines of supply.
Moon on a stick.

Obviously some of this stuff is a bit beyond the range of BKC so there will be a bit of rules (re)writing but hey that's half the fun of wargaming right?

We have already started allocating scenery tasks but first thing will be to get the rules out and have a game...more to come, exciting!