OK so month one was a bust with two losses, what can we do in month two...

What caused the biggest problems in month 1? The enemy scoring cheap kills using snipers to one shot my MMG teams, and the difficulty of rooting out infantry in buildings.

Clearly I'm going to need something to neutralize enemy snipers.


Thoughts.... the obvious one is to field my own sniper and try to take out the opposition first. I have quite a few order dice in the bag so its possible my team will get the drop but seems a bit of a gamble. When I played Japanese I used 2 Sniper teams to up the chances of getting the edge. OK, but what else could I do?

What tactics do infantry use when they have to make an assault in the face of the enemy?

Cover and smoke! If he can't see me then he can't shoot, and snipers take time to redeploy.

What does the US have in its box of tricks to deliver smoke... 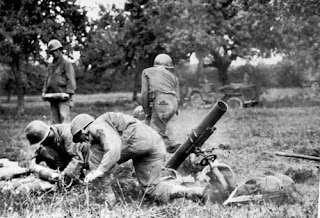 The 4.2", 107mm Chemical Mortar. Lets see what every lazy researchers favorite site says about them

Well if Mark Clark says it's policy who am I to argue? Clearly a historical precedent for including them with the division (yeah I get they wouldn't be on the board but whatever, fully expect to see cheesy heavy artillery appear in everyones list). Also with a respectable 2D6 HE rating these can also put the hurt on infantry hiding in buildings. They have a minimum range but if that forces the enemy to move in closer then fine I'll be ready for em.

OK mortar with spotter is in. I debate if I should take them as inexperienced to save the points (they hit on the same number as regs or vets) but I'm not that cheesy so I take them at regular instead and include a spotter for 75 points so I can keep them out of sight.

How can I get some more High Explosive in the list, a tank!

Course it is going to be a Sherman M4A1.


Regular M4A1 with pintle HMG and for ten points more cancel the "easily catches fire rule" (think you forgot about that Von-Cleweswitz) comes in at 230 points. Can take on other medium tanks, use its D6HE against infantry or even better just hose them down with the co-axial MMG, hull MMG and pintle HMG for 11 dice..

Finally with an eye on the final month I add a Captain with an aide at 120 points.

Why a Captain? Well I can add a second platoon in the final month and double up on some choices... erm 2nd Sherman, 2nd heavy mortar, 3 more MMGs we'll have to see what does well this month.

List comes to 911 points and I'll stop there and save the 89 change for the finale.


I went for the Plastic Soldier Company Sherman box, their tanks look as good as the FOW Shermans and come in considerably cheaper per model. Eventually I plan to get all five on the table. The Chemical Mortar comes from ebay and again leaves me with multiple models for bigger games.

This actually gives me enough stuff (still have plenty of left over infantry, light mortars, MMG, Bazookas from month one) to build up to (and over) 1500.
SO add up the purchases so far (the FOW US Rifle Company Box at £30) and the army comes in at £63.50, much cheaper than my previous 28mm Bolt Action or ahem...Dice Masters habit.