The Enemy Within Campaign - Day 6

Having got the measure of his players, the GM prepares for the next session by not preparing any adventure notes.  He does however bring a book he's currently reading on the Roman Empire, some snacks and his iPod.

ANGESTAG
Reviewing his notes, the GM realises the party has gathered about 10% of the clues they should have done by this point. He resolves to rectify this imbalance with some subtle hints. The party have one final discussion with Curd Weiss on their mission to find the missing Red Arrow coach and it’s contents. Curd: “You need to walk the route the coach will have…” Ichabod: “Can we have a coach?” Troll Slayer: “Yeah, my imaginary legs get really tired when I have to roleplay walking 12 miles” Curd: “Well, the clues to finding out where the coach was dragged off the road and into the trees will be… err, I mean, hypothetically speaking, if the coach was dragged off the road you’d need to…” Ichabod: “We can look for clues even quicker from the back of the coach” GM thinks to himself, “What would a real GM do at this point?” Curd: “Erm, we don’t have any spare coaches…” The party seem satisfied by this solid gold explanation and proceed to walk the route.

The game of 40k that was instead X Wing

Between work and being daddy day care I didn't have time to prepare for a game of 40k so Tom and I settled for X Wing instead.

X Wing has fast become my fave minis game. Besides having a really tight rule set, and lots of variety in builds it's simple to just get this out and play. Don't need to worry about  terrain, getting down the 6 x 4 table, dice, measures, writing a list and then finding all the minis. Also X Wing plays quickly (about an hour) which is perfect for a weeknight. 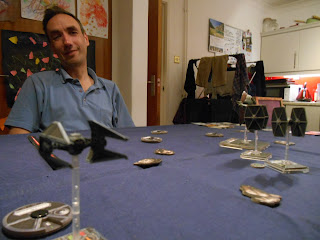 Another good thing is X Wing scales to however many players you have. 1 on 1 with a 100 points and a bunch of ships each is cool, or if there's a bunch of you you could go up to 8 Imperial players all flying an academy tie vs 4 players with an X Wing each. 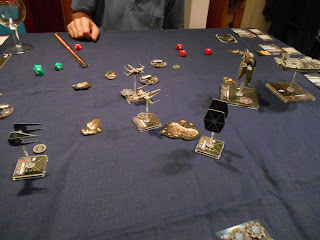 Short story Rebels won, tabled the Imperials and only lost their Rookie Pilot. Han was my MVP. Completely forgot to use Garven Dries ability to spawn additional focus, forgot to set up the Rookie close enough to Han to make use of Swarm Tactics and also most importantly forgot that the Fire Spray can fire it's primary to the rear arc (sorry Tom I'm blaming the wine and being spangled from sleep deprivation).

Oh and those big ships are hard to maneuver.... 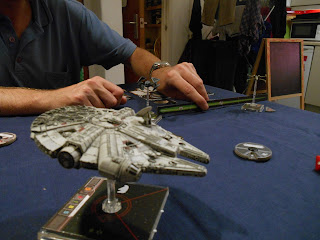 The day dawns with a heavy fog, but it soon clears away. The rains of the previous night have stopped, although the river is swollen still. With the return of Jochen to the party (having been whiling away his time his new BFF Konrad), the investigation into the disappearances gets re-energised. Jochen suggests re-examining the first body found, Klaus Keller, at the Temple of Morr. The GM reflects that this is actually an excellent idea, but realises the imminent arrival of a Post Urchin to deliver news on the Second Body, will look like forced plotting. Leaping forward into the story with the grace of an overweight spider with 7 of it’s legs hoovered up by an angry housewife, the GM lets the story unfold regardless.

The Enemy Within Campaign: Day 2

Bezahltag Early morning and Ichabod is rudely awakened by Buster barking at the dirty window. He’s spotted or smelled something outside that’s gotten his interest. Grumbling, Ichabod searches for his boots, before realising he’s still wearing them, then stumbles downstairs. They tread over the sprawled form of the troll slayer and step into the fog laden pre-dawn.