After two victories from two games (including one where my opponent made a do-or-die grab for the demolition objective, only to be destroyed by my HQ!) I'm feeling pretty pleased with Paracadutisi Nembo. Granted, I got a rather salutary lesson in the damage that 'Hitler's Buzzsaw' can wreak even on Veterans on the way, and am yet to play Tom's extremely broken Jeep list yet. But nonetheless I'm feeling confident enough to be the first to post the army list for my next 500 points, and risk ceding the meta to lesser players like Darren and Ed...

Now that's the obligatory trash-talk out of the way - on to the list.

So month one has drawn to a close and in true Italian style Jon swapped sides for his second game to take on and beat the HG Division.

The Inception of Jeep Meta: Getting the Airborne on the Ground


When Jon first mentioned the idea of getting back into Bolt Action I was all for it. Having built and painted a decent-sized U.S. force, it sounded like a good chance for them to see some action once more. However it wasn’t to be, as it quickly became apparent that the ‘scale shift’ had struck again and we were going to go for a 15mm escalation league.

Of course, you all know that if you have been reading everyone else’s posts, but I decided to stick with the U.S. for now – since I already had the army book (and a rather tidy-looking U.S. dice bag). 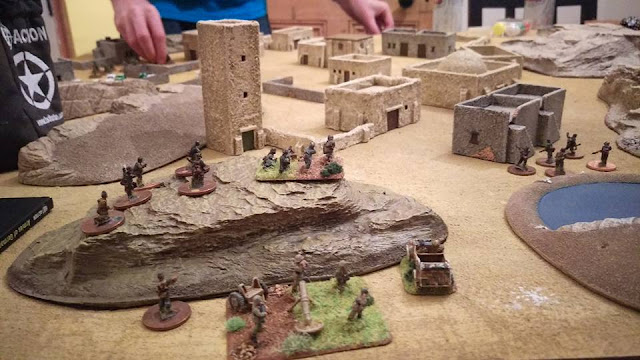 So everyone got at least one game in tonight with their 500pt lists, some of us had the pleasure of playing losing two...