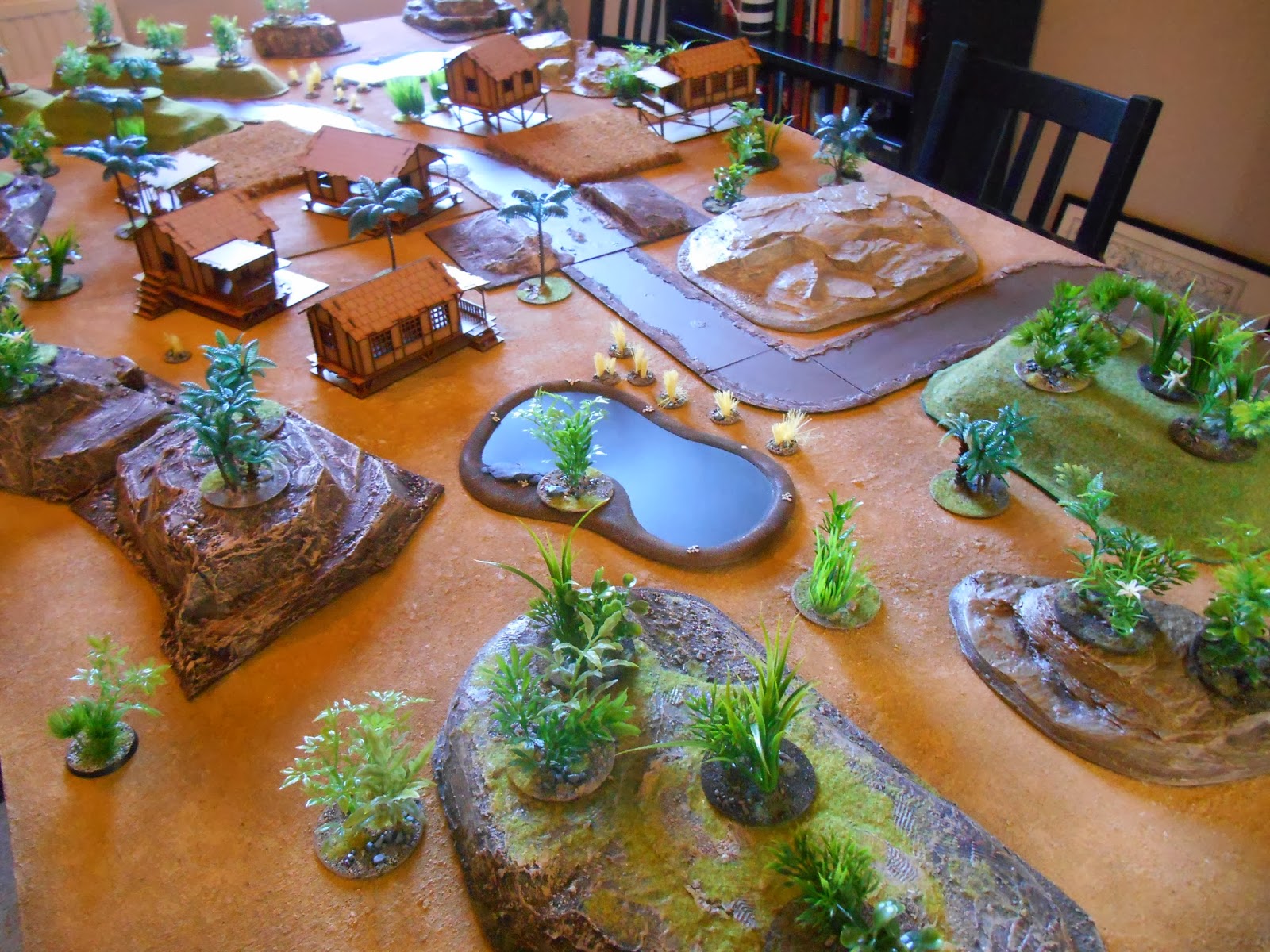 Saturday saw some of the guys get together to play Warwick Kinrade's Normandy Firefight skirmish rule set. Originally we were going to play one guy each but due to a few drop outs and late starters there was just the four of us so we rolled up a couple of guys each. 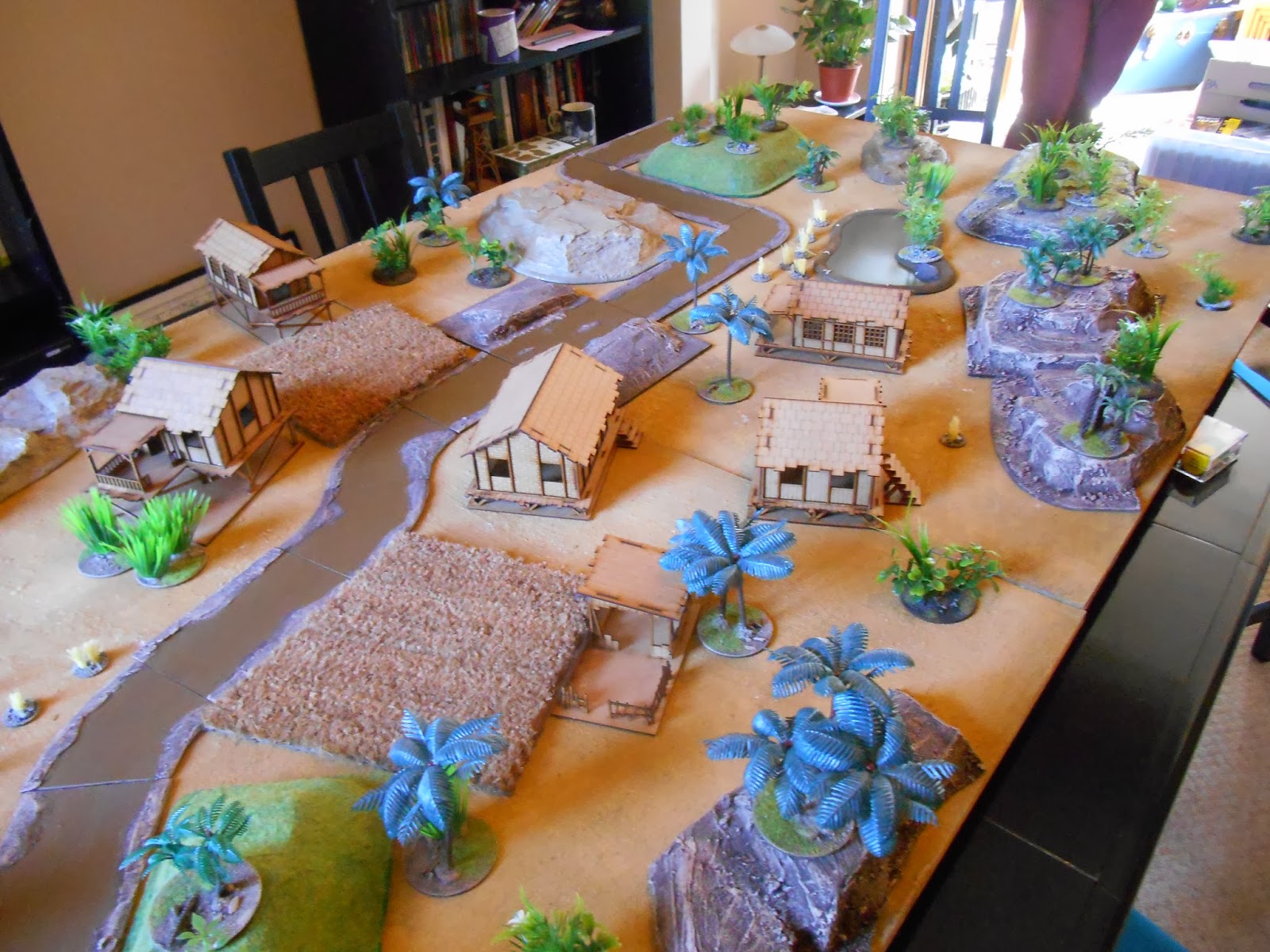 This is the second time we have played these rules, the suggested scale is 34mm but as we have figures and scenery in 28mm we went with that.

The rules suggest converting inches to cm if using 28mm and doing some extra division but the first time we played we found it was additional math for maths sake so thought we'd just play in inches as if we had 34mm figures. To be honest it made very little difference and I think as we were playing on a 7'x3.5' board the extra range and movement probably helped the game move a bit quicker. 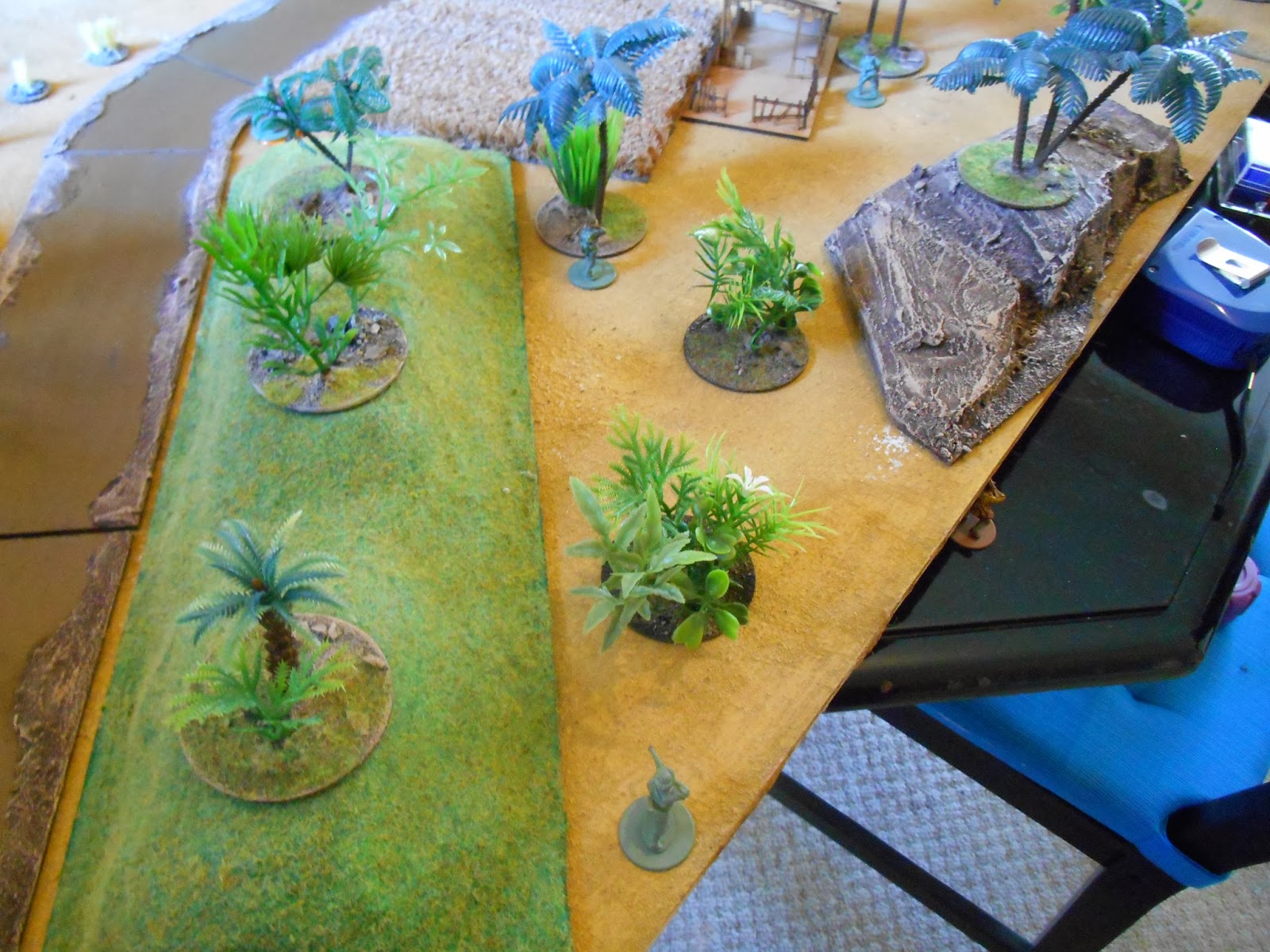 The scenario involved two patrols approaching a village, the Japanese had a flare gun that when fired would signal to the off table mortars to begin firing. The mortars were then rolled for each round and showed up on a 6 and were randomly placed off three possible pre-registered points. Theoretically the mortars were a danger to both sides although they definitely swayed the result. NCO Sutton San popped his flare immediately on turn 1.

Both sides pushed forwards, the Chindits making good use of the buildings and setting up their Bren with a good view through the village, the Japanese crossed the hills North of the village and squared off across the stream leaving their LMG on a hill behind them to cover their advance. 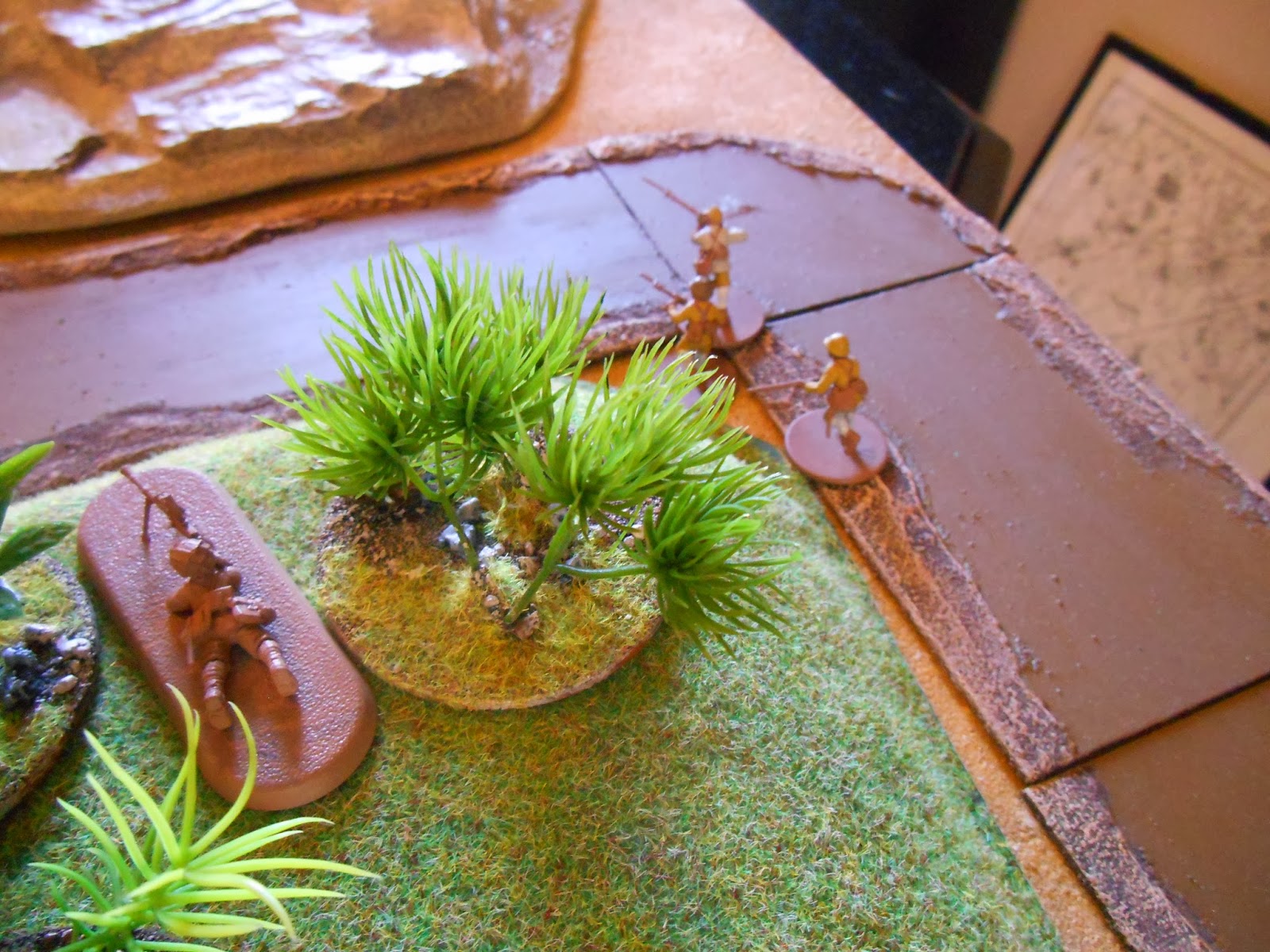 Despite both sides pushing too the pre-registered mortar position in the centre of the board it was the Chindits who found themselves taking a hits from stray rounds. 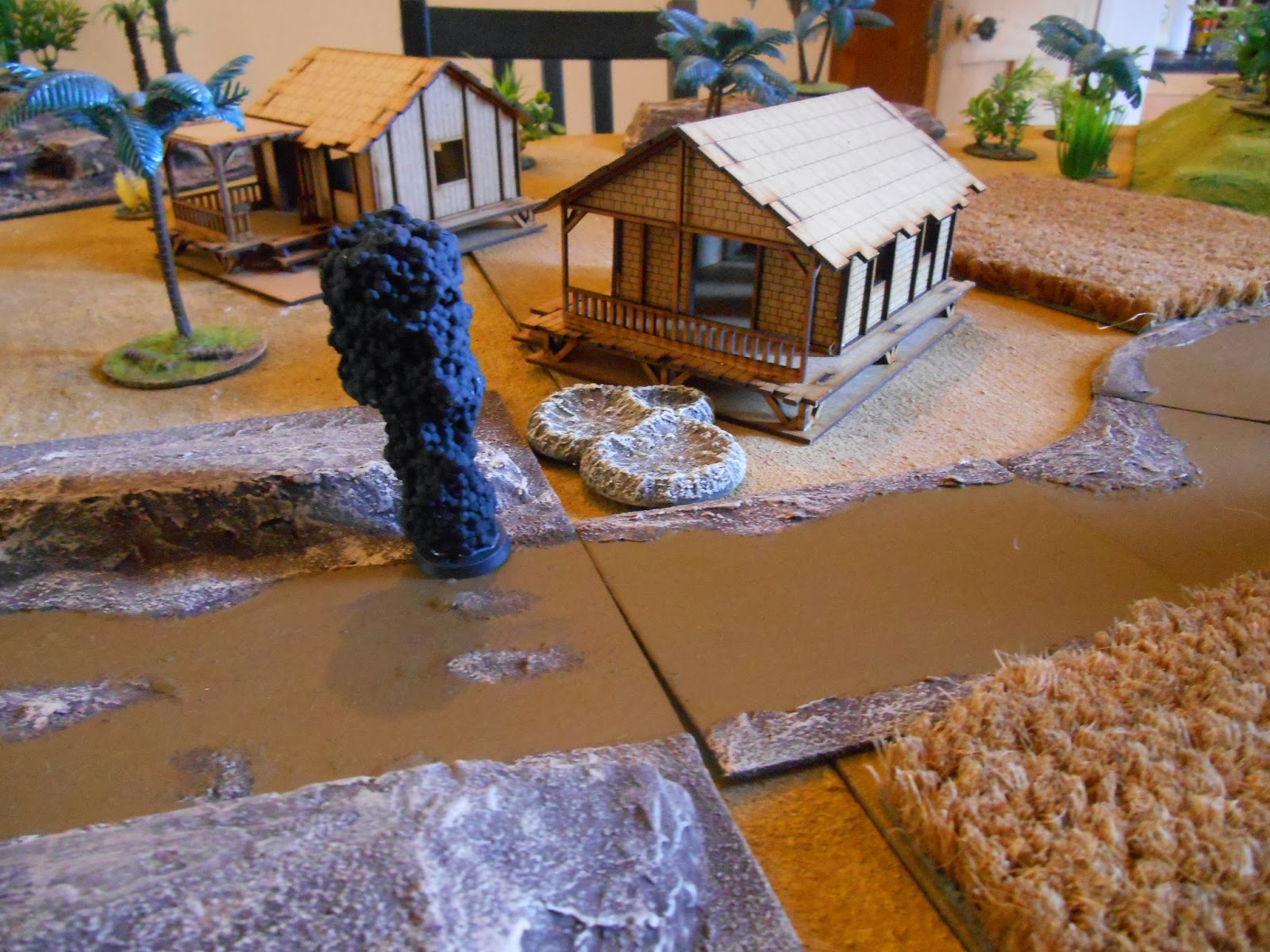 Early on the Chindits definitely had the upper hand and the better tactics. Moving through the buildings they quickly got into good positions inside two buildings. 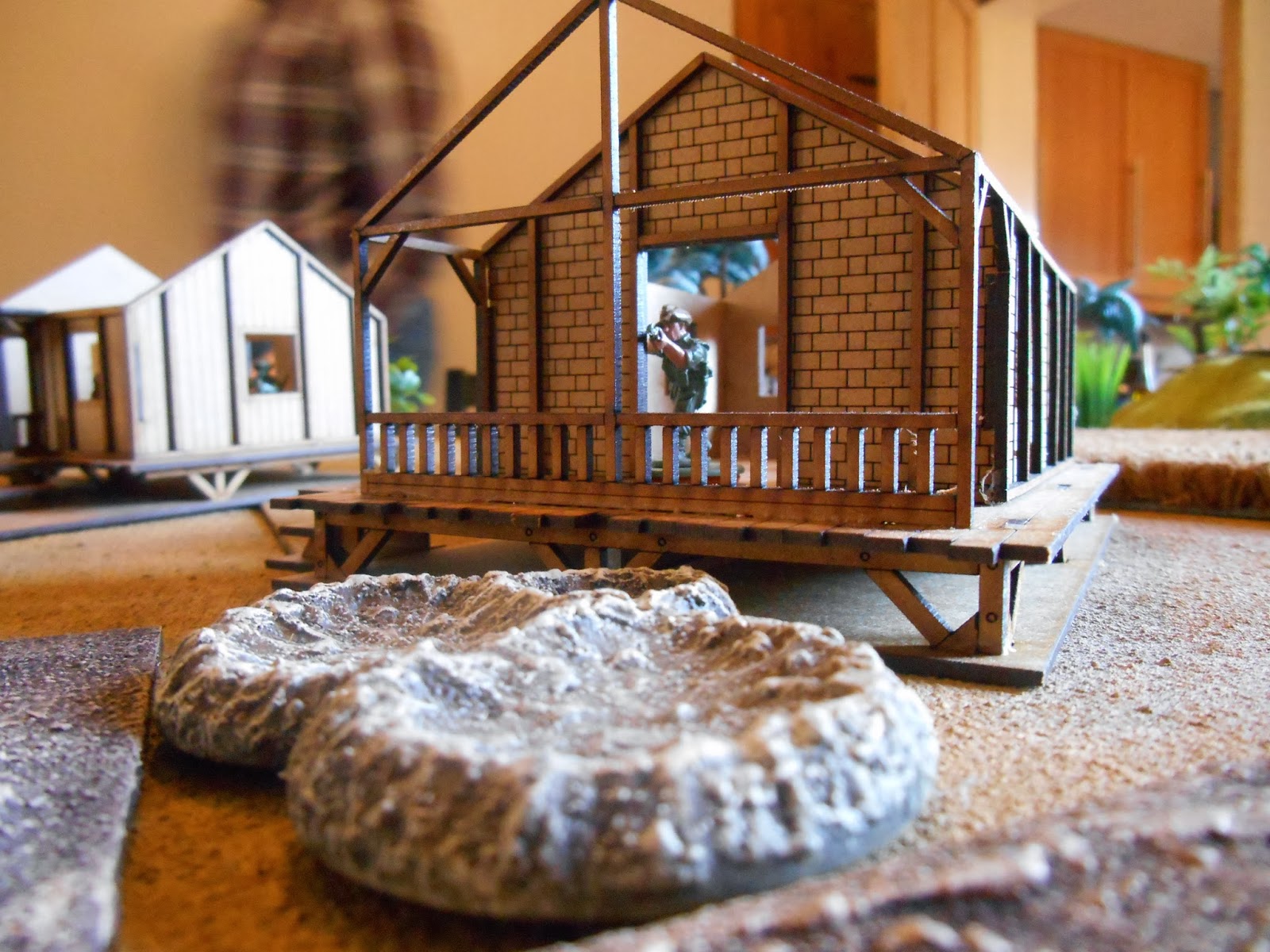 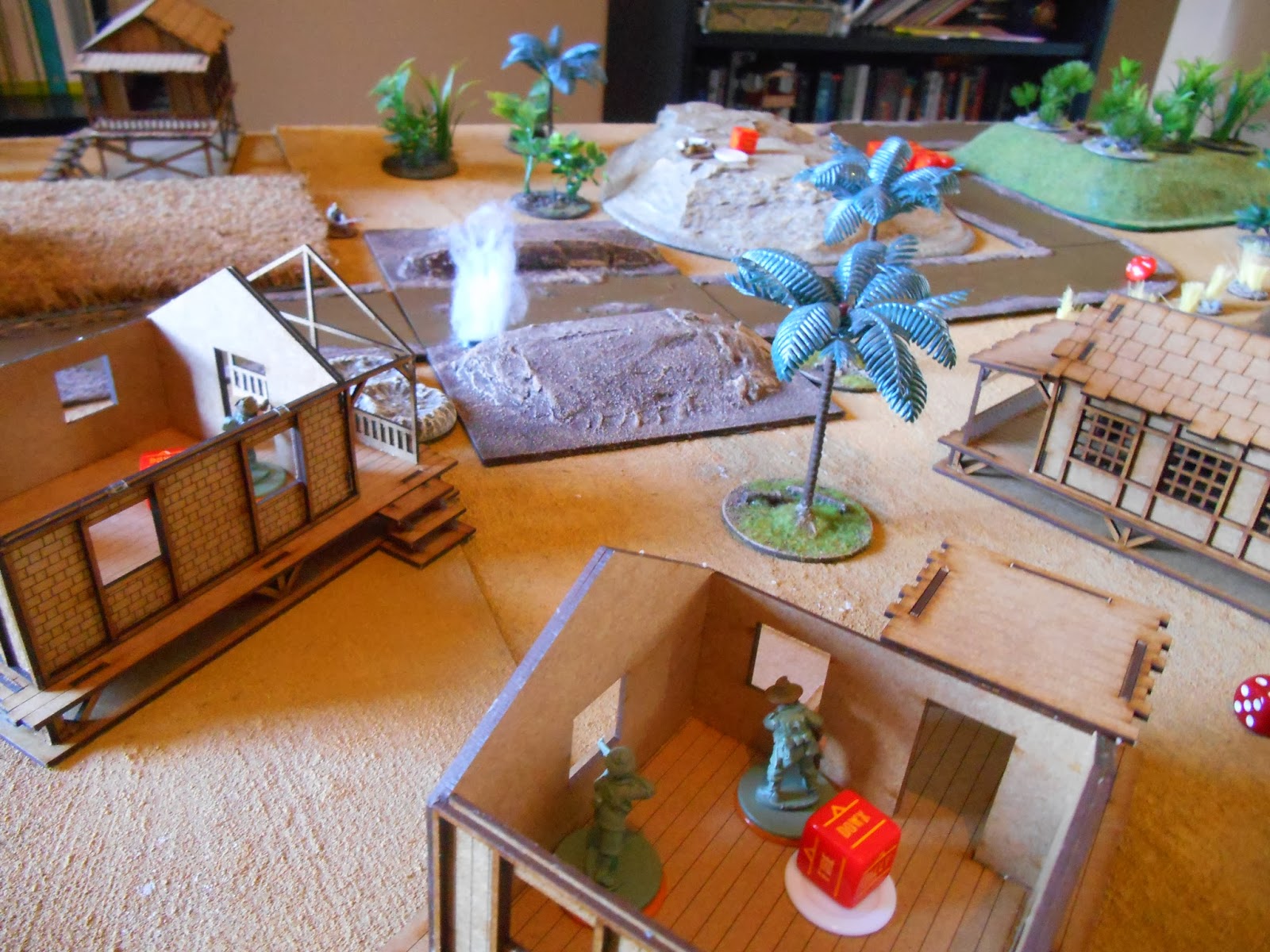 Concentrating aimed rifle fire they quickly took down one of the IJA privates from on top of the bluff. A second IJA private took a burst from the bren and a rifle round to the leg but still managed to keep going despite 70% damage.

Luckily for the Japanese the Mortars fell in their favor and all three Brits in the village took damage. 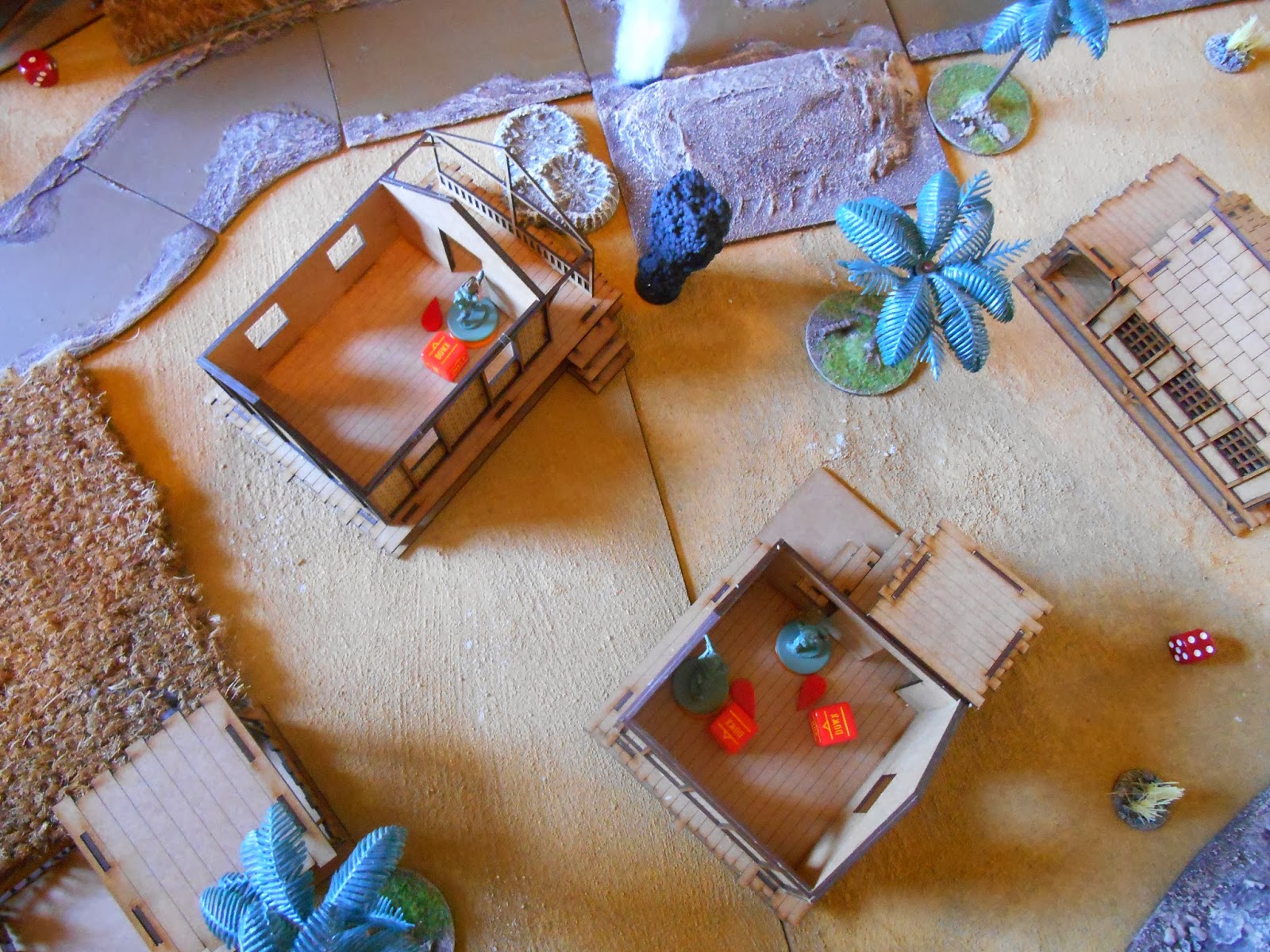 The Japanese LMG after a few ineffectual bursts at the Brits moving through the Village found himself in a race against the Bren Gunner to reload. The Bren Gunner unfortunately got pinned by a mortar round and before he could reload the LMG managed to get an aimed burst on target and put a couple of rounds into him taking him out and removing the Brits support weapon from the game. 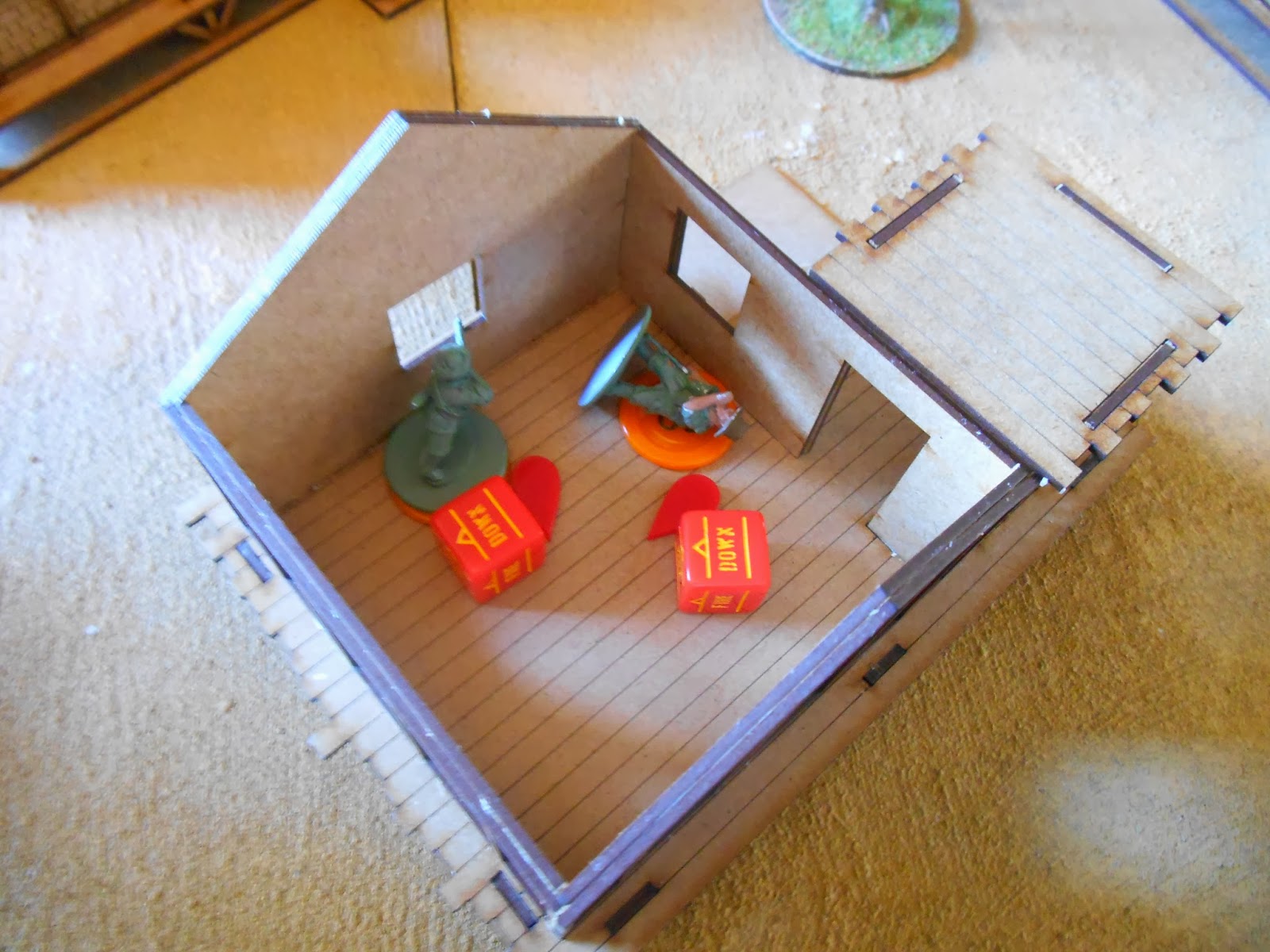 The British Captain was incapacitated at this point and spent the rest of the game crawling for the table edge, no one can remember how this happened, it was either from the earlier mortar or maybe the Japanese NCO's SMG.

The 70% damaged IJA private who had been pinned for a couple of rounds finally shrugged off pins and chucked a grenade right through the door of the nearest hut, putting a serious wound on the plucky Brit sheltering inside.

The Chindits shrugging off their disorientation from being blasted left right and centre hosed down the plucky grenade chucker killing him outright and then wounded the Japanese NCO seriously enough for him to decide to take no further part in the battle. He crawled from the field to die in the jungle. This left the unwounded Japanese LMG facing off against two wounded Chindits. 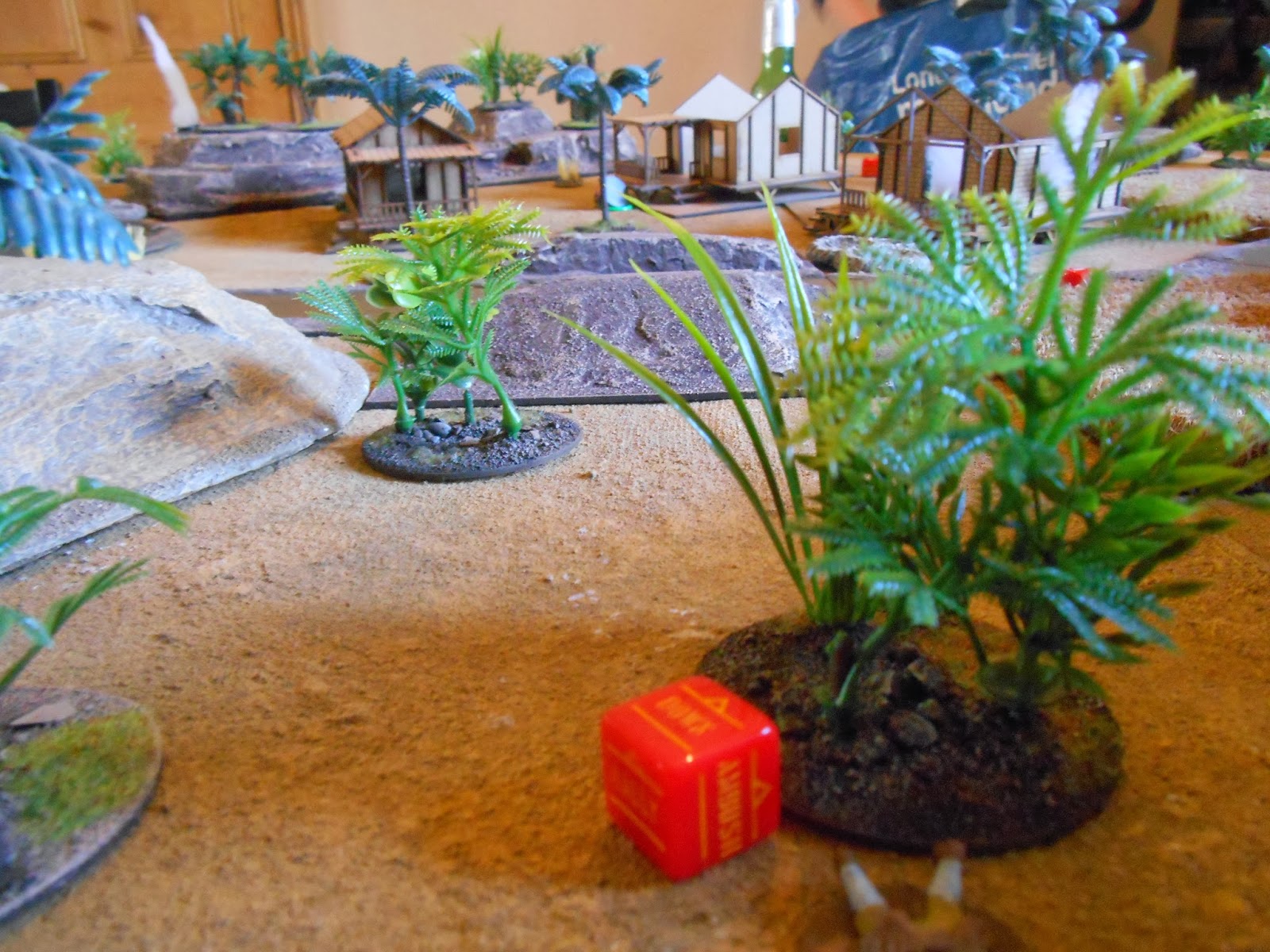 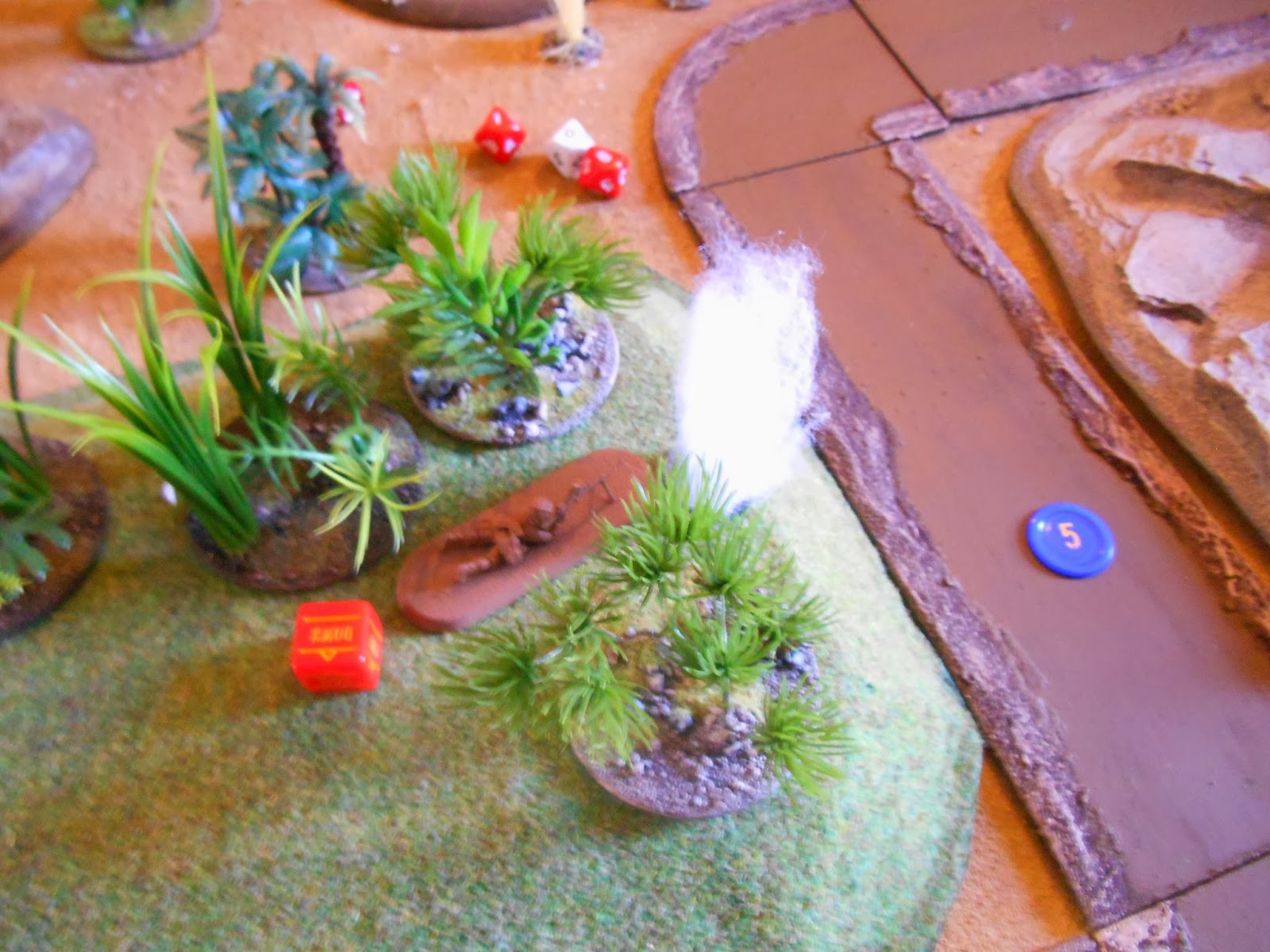 A Chindit grenade nearly ended it, but the slope in front of the LMG gunner must have deflected most of the blast and he managed to stay in the fight and take out a second Brit before the two could flank him.

Finally after many turns of not firing the off table mortar crews came off their Bento Box break and dropped a round right next to the advancing Chindit, securing the win for the Japanese.
Posted by Darren H at 10:57