Beneath The Raven Banner 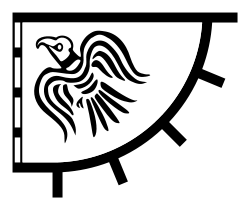 Spurði Sveinn hverja gripi Haraldr hefði, þá er honum væri virkt mest á. Hann svarar svo að það var merki hans, Landeyðan. Þá spurði Sveinn hvað merkinu fylgdi, þess er það var svo mikil gersemi. Haraldr segir að það var mælt að sá mundi hafa sigr er merkið er fyrir borið, segir að svo hafði orðið síðan er hann fékk það.
Sveinn asked Haraldr which of his possessions of his he valued most highly. He answered that it was his banner, Landøyðan. Thereupon Sveinn asked what virtue it had to be accounted so valuable. Haraldr replied that it was prophecied that victory would be his before whom this banner was borne; and added that this had been the case ever since he had obtained it.


When I first started gaming with Darren, Ed, Tom, et al, they were just getting into an exciting new game called SAGA. Keen to ingratiate myself into the group, I promptly toddled off and ordered the rules and a box of the plastic Gripping Beast Viking Hirdmen.  However as this was my first forray into historicals, I insisted on kitbashing them with a load of Games Workshop Chaos Marauder heads and shields in the hope that I would be able to use them as Norse Raiders in Warhammer Quest or Mordheim. Naturally I never finished them, and they now sit unloved and forgotten in a drawer in my desk. Though to be fair this is probably a kindness, as the use of GW parts means that they all look like they've been struck down with a severe case of Bloaty Head...


Our attention was then diverted to Dystopian Wars, for which I promptly brought a large French fleet (also unfinished - there may be something of a pattern here), but the less said about that the better...

Five (shurley some mishtake, ed.) years later, we still haven't ever actually managed to get a game together, unless you count the quick bash at the rules we had once we'd finished assembling our miniatures - appropriately enough, on a tablecloth covered in birds which if you squinted really hard could have been ravens. Also on a tablecloth covered in crumbs, because Ed has small - albeit now larger - children.

It was with this fact preying on my mind, and with the build-up to Salute 2016 underway, that I was hit by the triple threat of Studio Tomahawk announcing their *third* new major expansion to the SAGA rules (a Great Migration era setting) before I'd properly played the first one, the news Gripping Beast would be releasing a Viking-themed campaign supplement at the show, and finally the arrival of Blood Eagle on my doorstep. At that point I started to think that maybe I have a problem.


A quick survey of my bookshelf / drawers / under my bed later, and I realised that Blood Eagle brought the total of Dark Ages rules that I owned to four - and yet no painted miniatures, no scenery, and no games under my belt. Odin All-Father would not be pleased.


But amidst the signs of my shame, I also spotted an opportunity. My extremely slow painting output means I am a big fan of dove-tailing wargaming projects which I can use for more than one system or setting. Given that Blood Eagle can be played with as few as five miniatures, SAGA and Lion Rampant with about 36, and Shield Wall with as many as you can get on a table, it became apparent that I now own a range of rules which mean that I can start getting games in with miniatures as soon as they roll off the production line, rather than having to wait until I have a quorate warband (a phrase which must be a googlewhack by the way). And with our WW2 escalation league apparently having run out of steam and my fellow gamers as time-poor as I am, this seems like an excellent next step.


Possessing a well-attested scale perversity, I would usually look to game something like this in 15mm (Splintered Light and Khurasan both make some very nice looking Dark Ages miniatures). However this time round there is a pretty strong case for 28mm - not in the least that we all already own some Dark Ages miniatures, so it shouldn't be too hard to talk people into using them in anger! Another plus to 28mm is that 4ground do some of their excellent pre-painted MDF kits for the period. And the existence of multi-part plastic kits in this scale doesn't hurt, even if the Gripping Beast Viking Hirdmen were a bit of a nightmare to assemble.

So with 1500 points of 15mm WW2 Italians now complete, it's time to unfurl Landøyðan and embark on a new project! At Salute I'll be picking up a SAGA starter box of either Vikings or Jomsvikings, and from therein I will aim to paint one SAGA points worth of miniatures a month. As soon as month one is done I'll also begin forging the legend (and quite possibly also a narrative) of my Jarl and his heroic companions using Blood Eagle. In the meantime I will be glutting myself on mead, the TV show Vikings, and the Charlemagne DLC for Atilla: Total War that lets you play as Ragnar Loðbrók.

And to my fellow CUNTs - dust off your Dark Age minis and prepare to kiss my axe!
Posted by Jac at 10:47