In the battle for Monte Cassino, the Hermann Goring division's Oberstleutnant Julius Schlegel displayed either an estimable respect for renaissance art or his unit's namesake's deserved reputation as Europe's most proficient looter by having the division's workshop department fill their trucks with all of the Abbey's irreplaceable artworks and 'deposit them in the Vatican.' This prevented their destruction when the Allies flattened the Abbey but doesn't begin the explain how they were eventually found on a train in Bavaria at the end of the war....

Tempting though it was to field a platoon of  Kunstschutz - or 'Art Protection' troops, it seemed to me that a division of elite paratroopers probably contained some more effective options on the tabletop.

Like the monks of Monte Cassino, I'm under a vow. I have sworn off buying any new gaming related stuff for the calendar year 2015 while I concentrate my time and money on a much larger painting project, a new extended kitchen diner. Imagine how hard Salute was, then multiply it by 10 as all of my chums embark on a shiny new WW2 project in 15mm.

So I've had to confine my plans for a Canadian detachment to paper for a while and will field a force of Hermann Goring Fallschirmjagers using some of Jon's copious collection of late war Germans. I will eventually look to buy, assemble and paint this list too, but for now I'll be proxying in.

So with the force comp rules understood, and a quick look over the options for the late war German paratroopers, I got cracking on working up a list using BoltActionEasyArmy.com's force selector.

Given that I'm up against the most devious and down right dirty players I know, I would have abandon my usual strict adherence to historical accuracy and craft a really optimised list at 500pts, thus depriving me of my best excuse for inevitable defeat.

So for starters, all core troops choices are Vets which, while nice in itself, does mean that they are reassuringly expensive. They also possess some interesting late war German weapons choices, including the useful 4 dice LMGs and the intriguing Assault Rifles.

After much consideration, my core choices ended up as a suitably wizened Veteran 1st Lieutenant commanding two minimum sized squads of Fallschirmjagers. The first has an NCO with a rifle and two LMG teams. They will act as a firebase. The other unit of 5 consists of an NCO with an SMG and 4 Assault Rifle toting troopers. They will be my (fragile) offensive arm.

Keeping the core units small and thus cheap leaves me with a few points to throw around on support teams. First up is a Vet MMG team to lay down more suppressive fire. They will be assisted in the backfield by a Regular Medium Mortar team.

My final choice is a Vet Sniper team cos why not? Everyone hates snipers. They can reach out and touch your opponents best unit, no matter how much cover they have and are hard to hit in return.

This left me with 37 points to play with and I considered bulking out the troops choices but decided I'd like both another order dice and to get with the light vehicle meta we're developing on the Axis side. So in goes a Kubelwagon with a pintle mounted MMG. You can never have too many German machine guns in a list right? 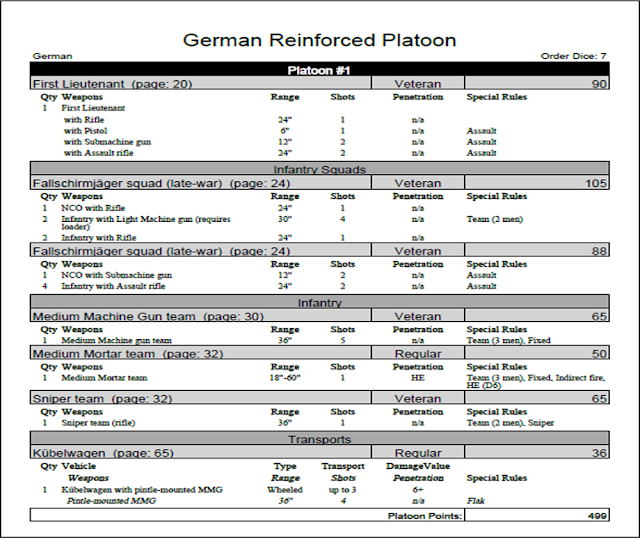 This gives me 7 order dice, which may give me a slight edge over my opponent, 4 machine guns with a range of  at least 30", a mortar and a sniper. My basic tactics (which I HAVE to try to remember) will be to pin the opposition in place, potentially pin them out, and then clean up with my assault squad.

I've got the flexibility to mount up either the Mortar team, the MMG team or the sniper/lieutenant in the Kubelwagon if I need to move up/out.

I'm noticeably short in anti-tank but I suspect that this wont be an issue in the first week with no vehicles with armour over 7+ and at 1000pts I may have space for a heavy ATG wielding Panzer.

I'm also going to argue that this is not too cheesy a list. It's not got any flame-thrower jeeps for a start. Or deep striking howitzers. Or Terminators. By this stage of the war, German units were typically below strength. They were masters of defensive tactics, utilising their widely available and excellent machine guns and possessing the experience that is reflected by a sniper team. Fallschirmjager units were better equiped than other units - although not that many were packing the StG 44 in Italy in 1943/44.

So I'm relatively happy with this and have already considered the options for the next 501pts. I suspect that with relatively few models its going to be a bit of a glass cannon and will rely, sadly, on me remembering how to use it properly. So that's that fucked then.