It's not my fault. Honest. I'm not an evil person per se - it was just that I couldn't take it any more. All those snide little remarks. The derrogatory comments. The constant jokes at my expense. And I happen to know just what will wipe that smile off their faces.

Allow me to explain...

When I'd first pitched the idea for a Bolt Action escalation league, I'd suggested the Italian theatre amongst others in an attempt to maximise the number of possible playable factions (not that it did a lot of good - the draw of the BROKEN American list proved too strong). The response was... not a positive one.

"The only time anyone ever wants to play the Italians is if you're playing Ancients!"

"Errr, actually guys if you take a look at the Italian list I think they'd be pretty competitive. Lots of elite troop types, cheap armour, and some pretty nifty tank destroyers - "

"Oh really? How many reverse gears have they got?"

"Do you mean tank destroyer, or do you mean an ice-cream van?"

Right, I thought. I'll show them! I'll write the sleaziest, beardiest 500 point Italian list I can. If only there was something in here that will really scare them. Oooh, what's this - a light tank that counts as an armoured car choice? And with a flamethrower, no less...? Mwahahahahaha!

At least those were my initial thoughts. This list almost died a death at a very early stage when I looked through 'Armies of Italy' and realised that - unlike the SPACE MAFINNS - the Italians don't have access to Panzershreks. Despite the plentiful historical evidence they were issued with them by the Germans. And the fact that Battlefront do some nice models of Italians armed with them. AND ALL BECAUSE WARLORD GAMES NERF THE AXIS POWERS WITH BROKEN LISTS IN AN ATTEMPT TO REFLECT WHY THEY LOST THE WAR, RATHER THAN LET SKILLED PLAYERS LEAD THEM TO VICTORY BECAUSE BRITS HATE TOURNAMENT GAMERS! *Cough* Sorry, I appear to have been channeling (the now defuct) boltaction.net there. Anyway, I'm not convinced that any mid- to late-war list can be viable without man-portable anti-tank weapons.

Fortunately, whilst looking through the errata for a rule which said that because one very lost Finnish soldier had fought in Italy I could have force selectors for a whole platoon of them in Bolt Action (I'm looking at you Lauri Törni - after all, he seemed to get pretty much everywhere else), I came across the additional units pdf and the Late War Paracadutisti Infantry Section. Panzerfausts! Three! For every squad! That's what I needed.


I was also reassured by the note regarding theatre selectors, which state that they can be used for Anzio - Paracadutisti are a notable omission from the Anzio theatre selectors, I suspect because Warlord initially only intended them to be used to represent Folgore in North Africa - or for the units that kept fighting on the Axis side until the end of the war. One of the niggling concerns when I chose to play Italians was that the September '43 armistice would seriously limit their utility without stretching historical accuracy to breaking point. I mean, I knew that Battlefront had Flames of War lists and miniatures for late war Italians - and they wouldn't lie to sell miniatures, right? Right...? But for the purposes of not being called a cheating bastard by my opponents, it was nice to have it written down in black and white by Mr Caviatorre.

The limited number of units that sided with the Axis after the Armistice rather than throwing in their lot with the co-belligerent forces, and the aforementioned requirement to include paratroopers, also made it easier to tie my Bolt Action force to a particular historical formation. The Bolt Action pdf mentions a newly raised Nembo division which took part in the defense of Anzio and Rome, and some further research revealed that they were formed out of the 185 Airborne Division Folgore - double hard bastards I already knew all about from the North Africa theatre.

The 185 Parachute Regiment of 184th Airborne Division Nembo were sent to reinfore the Italian forces on Sicily after the Allied landing - albiet arriving too late to do anything other than form a rear guard as the remaining Italians and Germans were evacuated to the mainland - before posing a fierce resistance to the 8th Army and Canadian troops during the landings in Southern Italy. The majority of the 3rd Parachute Battalion of the 185th then sided with the Axis, and fought to contain the Allied beach-head at Anzio - and continued to fight on after that, eventually being one of the last Italian units to surrender, in May 1945. So much for my concerns about utility! Looks like I'd found a historical formation to model my models on.

With the research done, I got to list building. Unsurprisingly, Late War Paracadutisti are veterans - so I knew I wasn't going to get many of them for 500 points. I do however need two squads for a viable platoon - and since they're the only troops I'm going to get, I might as well take them at full strength. Two squads of ten (allowed for Late War Paracadutisti, rather than the Folgore squads of nine in 'Armies of Italy') it is then. My first reaction was to cram them as full as SMGs as I could afford - any man can take one - but then thinking about the way the Italian 'Defensive Strategy' rule was going to force me to play, not to mention the MMG spam I was likely to be facing from Darren, I decided to stick with rifles. I also decided not to take an LMG, since as a group we are not actually convinced they offer much advantage if you aren't playing as the Germans. Similarly they won't need Panzerfausts in the first 500 points, but I will certainly be revisiting that option next month and giving them as many of the things as they can carry (sadly only three - and as a unit, not each). I will also definitely be taking the 'Stubborn' rule (it's free) as it might save them from being wiped out by a lucky mortar strike.

And then for my (now not so secret) secret weapon - the L6/40 (well, tecnically an L6 lf). This is a shoe-in as it is only 95 points, about as as well armoured as any of the tanks available to me, and yet still counts as an armoured car. Plus, did I mention it can take a flamethrower? To be honest, the light automatic cannon would probably be just as useful at 500 points (2 shots of D2 HE at 48"), but the psychological effect of the flamethrower on other players, let alone on their units, is more than worth the additional ten points. As I suspect it will be drawing a lot of fire, it at least has to be regular. And since I'm facing at least two cheesey American lists that I just know will be dripping with bazookas, I also need something up my sleeve to try and ensure that the L6/40 doesn't get taken out as soon as it comes on the board. A regular sniper will do nicely - plus I know Darren dislikes facing them - and combined with my other choices brings me up to a total of 435 points.


Of course, the problem with being a devious bugger is that you assume that everyone else is capable of the same baseness as you are. Is there a cheap vehicle that one of the others could take in their lists which would seriously upset my plans? Both the US and British get the M8, but at 110 points for regular for something which is open-topped, I doubt anyone will be fielding one. What worries me more is the potential for one of them (well, Tom) to bring a M3 Stuart, or even a Stuart Satan... in go two panzerfausts to each Paracadutisti squad. Still, thinking about it those are both tank choices, and neither of them is going to want to waste a tank slot at this stage when they can have something much better in the next 500 points... so out go the panzerfausts again.

Have I forgotten anything...? Oh yes, a platoon HQ! At this point he seems like a bit of an afterthought, since as stubborn veterans the Paracadutisti hopefully won't need much external motivation, but I have to take one. I have the points to make him veteran, but might as well keep him regular (arf arf) and give him a guaranteed wound soak in the form of an aide instead.

So there you have it - the elite paratroopers of 184th Divisione Paracadutisti Nembo. If I'm honest I'm a little worried about the lack of order dice, particularly given that I will need to eliminate any anti-tank weapons as swiftly as possible to properly bring the L6 lf into play, and I have a strong suspicion that my two squads will just be pinned out by weight of fire - but it will be nice to be facing regular forces as veterans, and if you've only got five order dice to begin with then it is hard to lose three more than the opposing player so the 'Avanti Savoia!' special rule shouldn't come into play in our 500 point games at least. Yep, overall I'm reasonably satisfied with this list. Still 5 points to play with too - oh go on then, just the one panzerfaust for one of the squads... There. All done. 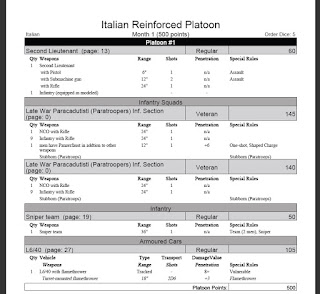